IE 11 is not supported. For an optimal experience visit our site on another browser.
Reminding each other that you’re on the same team can help you focus on getting these laborious chores done as partners.jacoblund / Getty Images/iStockphoto
Aug. 8, 2019, 3:32 PM UTC
By Nicole Spector

According to a new survey from Yelp, 80 percent of people living with a partner have disagreements about housework, with one fifth of that number saying they disagree often. The survey, which consulted 2,000 American adults who live with a partner, and was split evenly between men and women, found that the most common disagreements revolved around when to do the housework (53 percent), how to do it (50 percent) and who should do it (48 percent). Sixty-one percent said that they’d cleaned the home again after their partner did.

“Some of these results were surprising, but they make sense,” says Tara Lewis, trends expert at Yelp. “People can spend up to 690 hours a year cleaning, and we’ve seen an increase in people searching for home cleaning services. It’s now the third largest category for us and gaining in popularity.”

Anything you can clean, I can clean better

This issue of bickering over house chores hits close to home for me, as my husband and I often butt heads over who cleans what and how well. We both work from home, and it’s not unusual for one of us to use part of our makeshift lunch break to sweep the living room or scrub the shower.

However minor and monotonous these tasks may be, how we deal with them (or not) can lead to quarrels.

For instance, last week, I was upset that my husband didn’t acknowledge that I cleaned the entire stove. I didn’t say anything, until I noticed him re-cleaning the stove. Ah! My contribution had not only gone unrecognized, it had been perceived as not good enough? I initiated a dispute about how I think he thinks I don’t clean well, and also about how he doesn’t clean the toilet, ever. He retaliated by listing all the times (does he keep track?) he’s cleaned the toilet.

We usually cool down quickly, and always sincerely apologize for lashing out, but we never seem to actually resolve the underlying issue. We end up having a version of the same spat a week or two later. We’ve been stuck in this cycle of sparring over cleaning since we moved in together over five years ago.

Is there any way out other than outsourcing chores? Is there a way to resolve these matters and actually learn about one another in the process? Relationship therapists say there absolutely is, but it’s going to take, you guessed it, work.

Bickering over housework may look trivial in the grand scheme of things, but for many couples, it’s serious enough to make it to the therapist’s couch.

“In my work with couples, one of the most common arguments is about the division of household chores,” says Dr. Sharone Weltfreid, a licensed clinical psychologist. “Typically, women [in relationships with men] are the ones to voice frustration regarding the allocation of household chores. They express that they can't rely on their partner to complete the requested household tasks or to do so in a timely manner. Consequently, they will do the tasks themselves and resentment will build. Their partner, on the other hand, doesn't see the significance or urgency of doing the laundry when people in the household still have clean clothing, the trash is not entirely full, having the house spotless when guests arrive, etc. This partner can become defensive or shut down when [they] feel criticized, ‘not good enough’, [or] accused when his other contributions are not acknowledged.”

It must be recognized that gender roles and traditions can have substantial influence here, with the brunt of the work unfairly falling on women, as Dana McMahan discussed in a compelling piece for NBC News Better; but conflict over housework can go all ways, and as Weltfreid notes, can be a problem in any relationship, regardless of gender.

4 better ways to clean your bathroom

Recognize that this argument isn’t about housework — not really

So how do we end this vicious cycle?

“First, it is important to recognize that fighting about housework is never fighting about housework,” says Dr. Heather Z. Lyons, a licensed psychologist, couples counselor and the owner of the Baltimore Therapy Group. “Through housework we communicate levels of importance in the relationship, we show our partners that we recognize them, uphold or challenge gender roles and connect.”

It is only once couples acknowledge just how loaded arguments about housework can be, that “they can start having conversations that address each other's needs instead of spinning endlessly in the same never-ending arguments,” says Lyons.

Cool down and identify the triggering emotion

Let’s use my marriage and the stove cleaning blowout as an example (it sounds so silly, but I now see how it carries weight). I knew I was angry when my husband started scrubbing down the stove I’d spent the last 45 minutes scrubbing down myself, but I didn’t let myself cool down to actually reflect on why I was upset. I likely could have avoided the quarrel, and even found some peace of mind, had I taken a time-out to identify what I was feeling.

“Get to the heart of how you feel: burdened, unsupported, or incompetent and incapable of making your partner happy?” says Lyons. “This can provide clues for what is so triggering about these conversations and where these conversations can go. Of course, this might sound dramatic but arguments about housework can get pretty dramatic because of the meaning of these arguments.”

In retrospect, I understand that in that instance, I felt unappreciated, inferior and like my efforts were literally being washed away. A five-minute cool down might have helped me see that at the time — rather than lunging into battle-mode.

3 better ways to clean your bedroom

Have an empathetic conversation with your partner

Once you’ve cooled down, you should talk to your partner calmly and name the emotions you’re experiencing. You should also be curious and empathetic about where they’re coming from.

“To begin to understand each other's perspective, first recognize that you each have different thoughts on the matter and seek to understand your partner's point of view,” says Weltfreid. “Keep in mind that the way you broach the topic will impact the course of the conversation, [so approach it] with calm, care and openness. This is not about being right or winning an argument.”

Back to my now infamous spat about the stove. I’ve since asked my husband what he remembers feeling as our argument played out. He says he felt attacked, defensive and misunderstood. Hm. Sounds like his feelings, much like mine, were pretty significant underneath this ostensibly mundane squabble.

Once you’ve hashed out your feelings, continue the conversation to determine what you can both do to break the pattern.

“[Explain] that you want to work together to arrive at a plan for how chores will get done that works for you both,” says Weltfreid.

Create a practical routine together — with a date night on top

“I suggest that the couple sit down and create a chore chart and list the most important chores that need to be done each day or week,” says Mogensen. “Assign a day (and even a time) that this chore will be done; for example, the bathroom is cleaned on Saturday mornings or the dishwasher is loaded before bed each night. Display the chart somewhere [you] can both see it and check off the chores as they get done.”

Once the chores for the week are completed, Mogensen recommends rewarding yourselves with a date night, or something else you can enjoy together.

“By setting a 'group reward', [couples] are more likely to work together as a team to achieve it — this works for families too,” Mogensen says.

“Team” is an important concept here and reminding each other that you’re on the same team can help you focus on getting these laborious chores done as partners.

“Housework has always been a hot button fight starter in our marriage. With three kids, a busy life and busy careers there was a high level of conflict about whose ‘job’ it was to empty the dishwasher or put away the laundry,” says Meaghan Dawson, a full-time mother and blogger.

“My husband and I were essentially two sides fighting against the middle, always tired and always stressed, yet the fighting over who was going to put that load of clean towels away actually caused more stress to both of us in the long run,” Dawson says. “The single biggest factor that changed this for us was one short phrase: ‘same team.’”

“If it is invoked in the middle of a housework argument it is meant to stop us in our heated tracks and force us to remember that we're on the same team,” says Dawson. “The truth is that we both want a clean house and we both play equal parts into making the mess (though an argument can be made that the kids outpace us both by far in this race). The truth is that we're both tired, we're both busy and neither one really wants to put the laundry away — but when we acknowledge out loud, to each other, that we're on the same team, it shuts down the ‘me first’ attitude and forces us to focus on our shared wants and goals.” 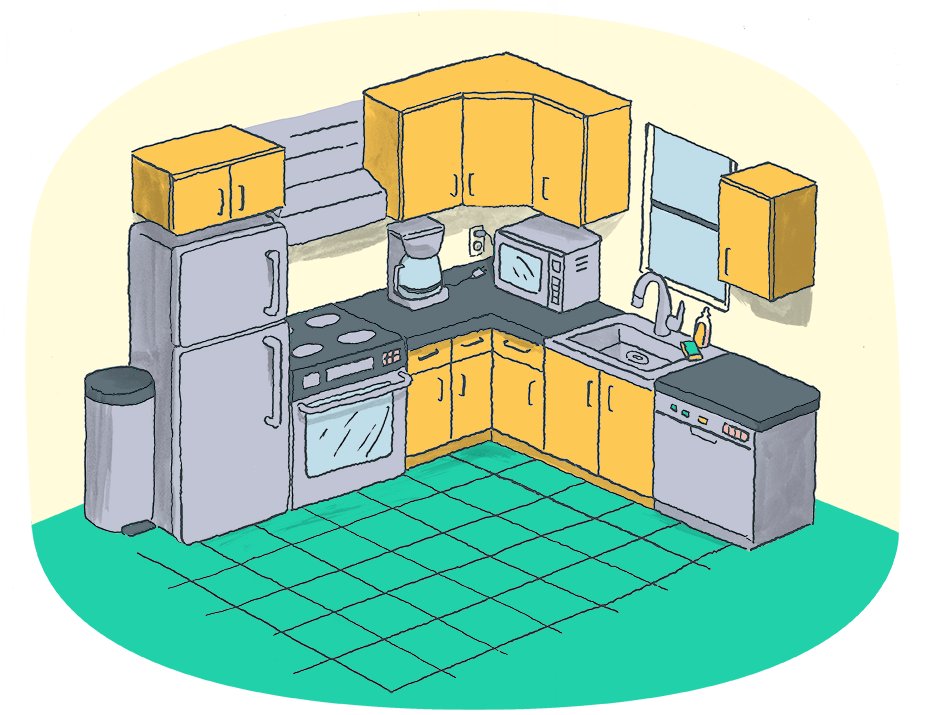 Do It BETTERCleaning? This interactive room-by-room guide will make it easier

Joree Rose, MA, LMFT, underscores the importance of gratitude. Let your partner know you see what they’re doing and you’re grateful for her efforts.

“Thank your partner for what they do around the house, even if it’s their assigned ‘job,’” says Rose. “Showing gratitude will help you respond to your partner’s needs, maintain intimacy and connection, ultimately allowing each person to continue to contribute with ease to the demands of maintaining the home.”

Dr. Dani Moye, LMFT, also champions taking the time to acknowledge your partner’s efforts, even if they strike you as subpar.

“By showing gratitude for what they were able to accomplish, you highlight their strengths as a partner,” says Moye.

So, if your partner just spent her lunch break scrubbing the stove and you notice she left a few crumbs behind, say thank you anyway, because she probably did the best she could. Additionally, maybe wait until she leaves the room before you break out your own sponge.