IE 11 is not supported. For an optimal experience visit our site on another browser.
A dish of cod, cabbage and edamame taken in New York in 2018. Cabbage, that taken-for-granted vegetable, that sturdy, dense staple of many a poor, ancestral homeland, is finally getting respect.Cheyenne Cohen / Katie Workman via AP file
Sept. 16, 2019, 9:18 PM UTC
By The Associated Press

Here’s a sentence that might come as a surprise: Cabbage is cool.

That taken-for-granted vegetable, that sturdy, dense staple of many a poor, ancestral homeland, is finally getting respect.

“It’s all about how it is prepared, how it’s elevated,” says Paul Kahan, a James Beard award-winning chef in Chicago and self-professed cabbage freak.

He thinks that because cabbage has mainly been associated with sustenance, it hasn’t been given its due.

Cabbage is part of most of the world’s cooking history. Perhaps most famously, it was one of the only sources of sustenence in famine-ravaged Ireland in the mid-19th century. Thus the classic Irish dish corned beef and cabbage, not to mention colcannon.

In China, there’s cabbage sauteed with bean curd. In England, cabbage cooked with potatoes and other vegetables in bubble and squeak. In Norway, the hot and sour surkal. In the U.S., coleslaw. Fermented and pickled cabbage dishes abound, including kimchi in Korea, and sauerkraut in Poland, Germany and other parts of middle and Eastern Europe. Stuffed cabbage rolls are part of just about every cuisine, form golabki in Poland to holishkes in Jewish cooking to sarma in Croatia.

There’s more, but the point is: In all times and places, cabbage has been valued for its plenteousness, cheapness, long shelf life, and ability to be preserved for an even longer shelf life. It can be eaten raw or cooked in pretty much any way a vegetable can be cooked.

He has been on the cabbage bandwagon for years, serving it at his upscale Chicago restaurants in various guises. At Publican, they char wedges of cabbage in a wood-burning hearth and then finish them in a pan with butter and shallots. Kahan remembers being inspired by a dish made by New Orleans chef Alon Shaya: “It was the first time I ever saw a chunk of cabbage served at a restaurant.” 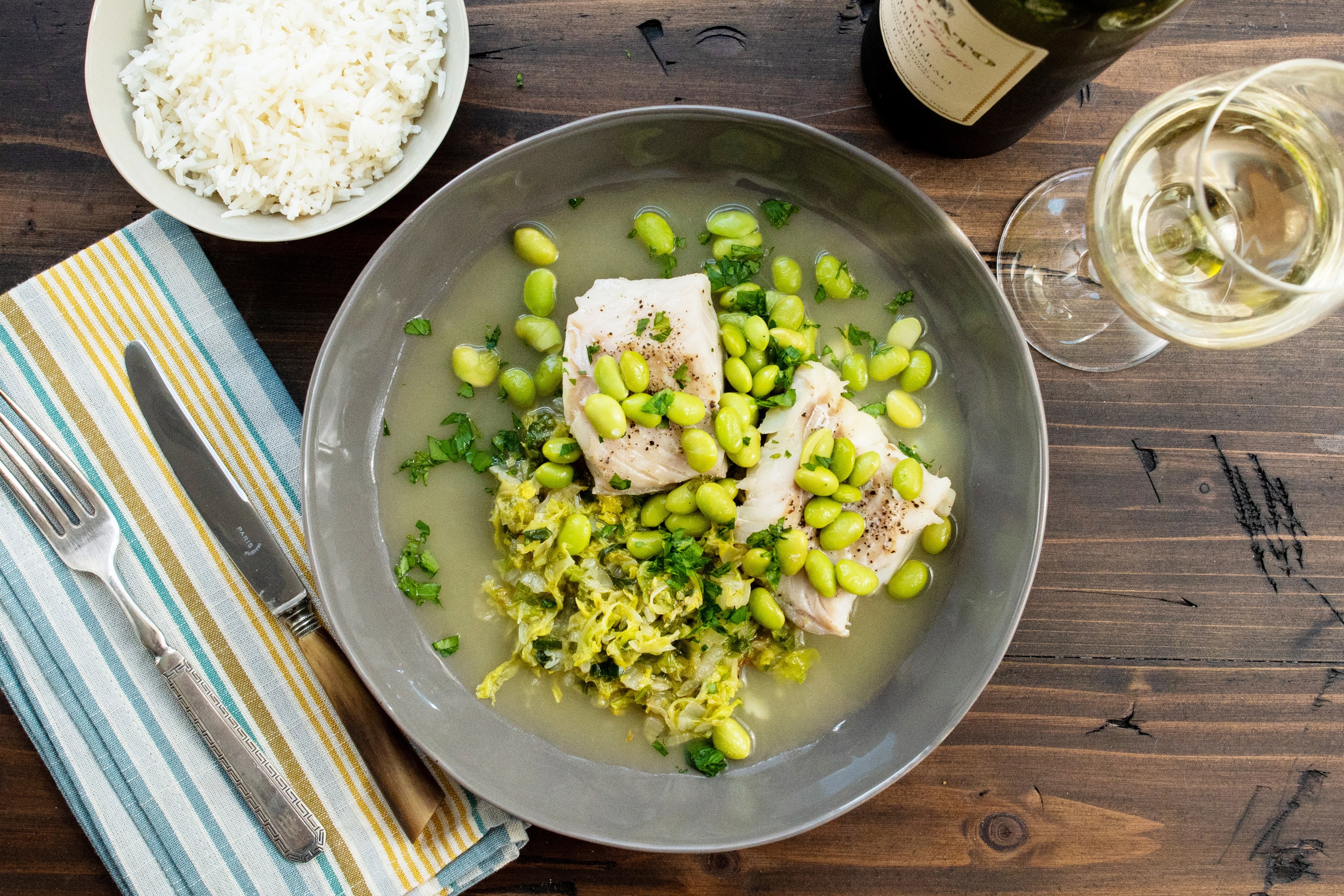 And that’s how kitchen trends start — chefs get inspired, borrowing from other restaurants and other cultures; food publications take their cues from the chefs; and suddenly, cabbage recipes proliferate.

Robert Schueller, the “Produce Guru” at Melissa’s Produce, a specialty company out of Los Angeles, says chefs and restaurants are the clear drivers behind the cabbage movement. Cabbage is being used as everything from a taco topping (common in Mexico) to a base or nest for menu items such as marinated fish. Chefs like how cabbage maintains a crisper texture than other greens when served with warm foods, he says.

“We have seen a rise in Napa cabbage, too, which is used in Asian stir fries, fermentation and pickling, all of which are gaining in popularity. The most interesting thing is that the rise of Napa is not just in Asian groceries and restaurants,” Schueller says.

Gabriel Kreuther gets creative with cabbage at his eponymous restaurant in New York City. He purees well-cooked cabbage as a base for some garnishes; uses it in a side dish with trumpet mushrooms warmed in duck fat; and serves up a simple slaw of shredded cabbage, onion, oil, vinegar, and salt and pepper, maybe with some julienned gruyere cheese mixed in.

“It goes with everything; it’s refreshing, it gets better with a few days macerating time, it’s soft and crunchy, it’s healthy,” Kreuther says.

At the restaurant, they make their own sauerkraut, a dish he grew up with in his native Alsace region of France. Kreuther serves the sauerkraut in a smoked sturgeon; his sauerkraut tartlet topped with caviar mousseline is in a filo pastry shell and served under a wine glass filled with smoke.

Kreuther likes mixing poor man’s food with luxury ingredients and seeing how they play against each other. That explains another dish on his menu: layers of squab breast and foie gras wrapped with cabbage leaves, and then encased in Tunisian brik dough and seared until the outside is crispy.

And how do people react when they see cabbage on this highbrow menu?

“People pooh-pooh cabbage,” he says, “but when they taste it well prepared they say, ‘Oh, I didn’t realize cabbage could be so delicious!’”

Katie Workman writes regularly about food for The Associated Press.